Less More
23 Jun 2017 19:11 - 23 Jun 2017 19:11 #1 by Hank Onthewater
Hank Onthewater created the topic: flat battery or.and faulty startermotor
We all wonder sometimes how to start the engine when we have a flat battery or when the startermotor fails. Yes, on bitumen we may just be able to pushstart, eh, a bit downhill or a large crowd pushing might be needed. On the dirt,…..not possible. We have to wait for another car to have jumper cables.
How many of us carry a spare startermotor?

Small engines (with a de-compression lever!) may be started with a pullcord or a crank handle, a Perkins in an OKA, hmmm….. not.
There are other methods to start an engine without a electric starter, there are hydraulic systems, and windup startermotors. Anyone has something like that? Or are there other solutions?
Last Edit: 23 Jun 2017 19:11 by Hank Onthewater. Reason: typo

Less More
24 Jun 2017 07:14 #2 by Tony Lee
Tony Lee replied the topic: flat battery or.and faulty startermotor
Up near Exmouth my starter failed, so it was a big sigh, clear the dining room table (as it was blowing a duststorm outside) and pull it all to pieces, clean and relube and hope for the best.
On return home I did buy a used starter and now carry it with me. Just another bit of heavy junk to cause suspension problems in the future.
I figure as long as I carry the spare, the original one will always work perfectly.
Tony

Less More
24 Jun 2017 11:41 - 25 Jun 2017 07:55 #3 by dandjcr
dandjcr replied the topic: flat battery or.and faulty startermotor
Hank, outyonda once suggested it might be possible to start the engine using a rope around a rear wheel, while off the ground and in low gear (not with a diff lock or LSD). Just like starting a lawnmower??

I've started ours by jacking the rear up and on to wedges, logs, blocks etc and then pushing or letting it roll off. A rudimentary down hill bump start which worked. It doesn't take much inertia to kick start the engine and even on soft ground you might be able to clear a couple of metres of flat ground in front of the wheels.

BTW, if you are bump starting, you don't need much electric for the Oka engine, only a small 12v supply to energise the injector pump solenoid. That could be from a few torch batteries if necessary. Anything from 9v upwards would do, similar to a relay.

Once the engine is running fast and the alternator is charging, quickly switch the solenoid wire back to the normal supply before the engine stops.

Worst case, remove the solenoid from the injector pump, remove its operating pin and spring and replace the solenoid. Then you need no electrics at all. See my notes on this and similar subjects here 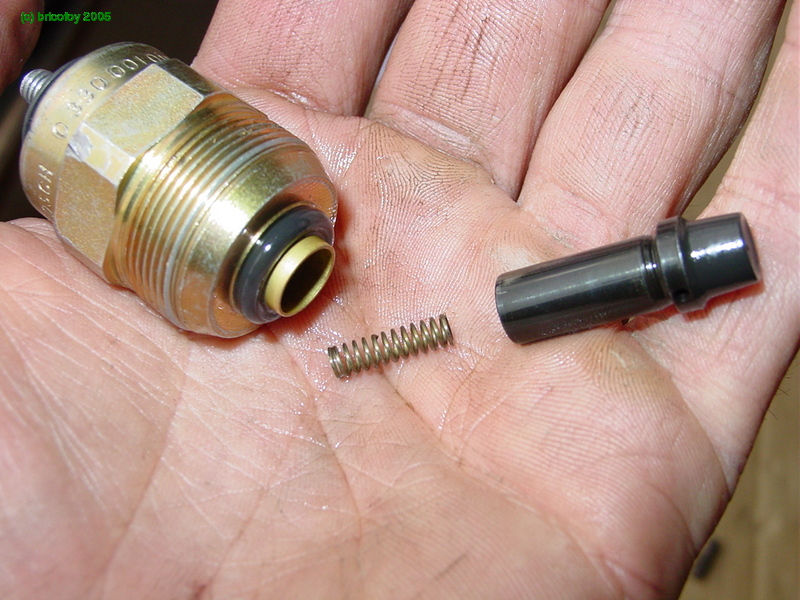 However, the fuel supply is then ON all the time so the engine, once started, won't stop and will need stalling or use the manual stop lever on the side of the pump..

Re starter spares, when my starter armature failed in Eucla, we bump started it and got to Robin In Coolgardie where I assembled a working one out of 2 failed motors.

Since then I have carried the small lighter parts around as spares, ie not the heavy frame or amarture (don't have one and couldn't get one), on the basis that it's most likely the small parts which will fail first (bearings, brushes, pinion gear, solenoid etc).

Hopefully Murphy will be kind next time and not break the armature twice.

Less More
05 Jul 2017 18:03 - 05 Jul 2017 18:07 #4 by Hank Onthewater
Hank Onthewater replied the topic: flat battery or.and faulty startermotor
Thank you David, I guess only a few metres of level ground...... but using a pull rope on a rear wheel? I guess that would be very hard, but then again when one is desperate, one will try nearly anything.
Here is another solution Kinetico spring-starters , according to the blurbs, engines up to 9 lt can be started that way. It looks they make one for the Perkins 110 Phaser.
They have a local Oz agent, KH Equipment in Victoria
My enquiries were initially more for the boat (also a Perkins 4 lt engine), as a boat engine can not be push/tow started, and there is no roadside assistance,

Less More
06 Jul 2017 05:53 #5 by Peter and Sandra OKA 374
Peter and Sandra OKA 374 replied the topic: flat battery or.and faulty startermotor
Usually starter motors will give you fair warning of impending mechanical failure, slow cranking, jamming, funny noises etc so it is best to take not of any changes. Electrical problems will also usually give signs of problems like slow cranking, several attempts to get it to turn, solenoid sticking etc so paying attention to cleaning terminals, leads, ground/chassis connections will usually avoid being left stranded.
As 374 has had an auto trans for most of the last seven years and bump starting is impossible with an auto I carry a complete spare starter. With the Destroked/6BT/4L80E conversion using an F250 starter they are freely available for under a $100 brand new and being a geared and relatively small only weigh a few kilo's so not much imposition on the spares box.
OKA 374 LT Van, converted to camper/motorhome,
400ah Lithiums, 1100w solar, diesel cooking heating and HWS,
Cummins 6BT, Allison 6 speed auto, Nissan transfer.

Less More
13 Aug 2017 13:04 #6 by Chalkie
Chalkie replied the topic: flat battery or.and faulty startermotor
My starter battery (317 only has one battery on the left side) just gave up after eleven years. It is (or was) a Ritar 100AH AGM.

Less More
04 Aug 2018 16:57 #7 by Holmz
Holmz replied the topic: flat battery or.and faulty startermotor
Well I hopped in Friday and it cranked for about 5 seconds and then stopped.

Pulled the right hand side battery out today it check good at the battery shop.
I assume that is the starting battery.

The cable was a bit second hand at the swagged end that fits onto the battery post. But when the key is rotated now, nothing happens except the lights on the dash all dim.
So I can get the cable attended to once I get it started.

What sayeth the wise?
Do I take jumper cables and put a second battery right to the starter?

Where does one source a solenoid and a starter motors for a phaser?
I assume I need one, the other, or the cable is daggy somewhere else...

Less More
04 Aug 2018 17:43 #8 by Peter and Sandra OKA 374
Peter and Sandra OKA 374 replied the topic: flat battery or.and faulty startermotor
Your description that the starter operated briefly does possibly indicate a battery connection problem.
The RH battery may not be the staring battery as most Oka's have been modified at sometime in their 20 year plus life.
The majority of battery problems on older vehicles are due to the earth or ground connections, there should be a cable between the engine and the chassis and in turn between chassis and the battery, remove and clean all surfaces back to clean shiny metal and reattach.
Once you have checked the ground path then take a look at the positive path, most Oka's have or had a master battery switch quite often behind the drivers seat on the LHS check the connections underneath as the actual switches and the bolt connections can go high resistance. Unless you are a contortionist the easiest access is by removing the panel behind the engine at the back of the cab, this will also make for easy access to the starter motor connections.
OKA 374 LT Van, converted to camper/motorhome,
400ah Lithiums, 1100w solar, diesel cooking heating and HWS,
Cummins 6BT, Allison 6 speed auto, Nissan transfer.
The following user(s) said Thank You: Holmz

Less More
05 Aug 2018 15:05 #9 by Holmz
Holmz replied the topic: flat battery or.and faulty startermotor
OK...
As mentioned, yesterday... On Saturday I pulled out the RH battery and brought it to the shop. It was "all good".

Today I charged the LHS battery for a few hours.
Still no cranking joy.

The I ran jumpers from the RHS battery negative to the bellhousing, and the positive to the solenoid.
No cranking joy.

Disconnected those jumpers, and pulled the small wire off of the solenoid...
it showed 12V when the key was turned.,. Some joy.

I put the jumper cable onto that 1/4" tab and jammed the other side onto the battery and she cranked.

I have 12V on that small solenoid wire when it is not hooked up to anything and when hooked up to the solenoid, then there is no 12V displayed.
So I guess I need to:
- run a new wire from the instrument panel to the starter(?)
- or run a temporary from the instrument panel back to the starter to see if that does it(?),
- or if there is some dodgyness in the key/switch.

It would still be useful to know where to source a starter and solenoid if I ever needed one.
... and their prices,

Less More
05 Aug 2018 16:50 #10 by Frank
Frank replied the topic: flat battery or.and faulty startermotor
PJL diesel is where I sourced my starter from.
there are at least 3 variants of starter motors on the Perkins 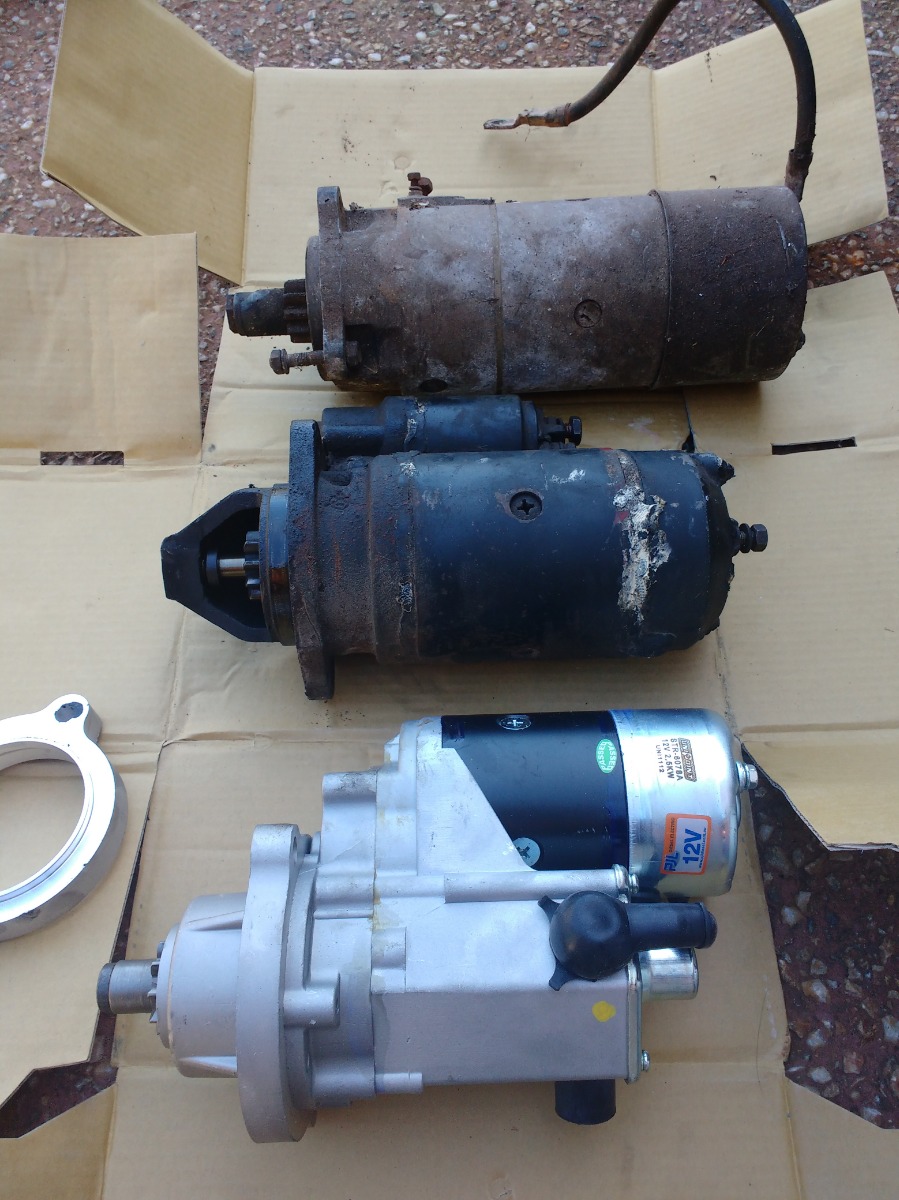 top is what was on #260
middle is what was on #164 (it didn't die, it just refused to turn off sometimes, makes a horrible noise)
and lower is what replaced it this year. replacement requires a spacer (also from PJL Diesel) and a stud, and take note of bolt lengths if you need to rotate the starter nose on body.

cost was $353 back in Sept 2012 (carried it with me for years, but of course didn't have it with me when the other one played up, which was probably a good thing as it needed different bolts/studs anyway.
Frank & Christine Thomas

Less More
07 Aug 2018 13:43 #11 by mort
mort replied the topic: flat battery or.and faulty startermotor
Frank, wow you did well I had to replace mine not long after buying my oka not knowing where or what I got from Paul at $800 odd delivered and pjl diesel is down the road from me...you live and learn.
Martyn