It can happen in the most unlikely places...

Dandj
Member
Posts: 367
We are on a trek up Cape York and got bogged.

Not surprising you might think, but it didn't happen on the Cape but in the middle of a rest area in Blackall.

We were crossing a large grassy rest area next to the river watched by dozens of caravanners (who normally provide the reverse parking entertainment for us), when we went over a small dip which appeared to have a firm sandy bottom.

The front wheels went over just fine but the rears suddenly went down to the axle and we were going no further. I took a few pics while we contemplated the solution but before we could get our recovery gear out, the cavalry arrived in the form of a LandCruiser (who had narrowly avoided doing the same himself), hooked up the winch and had us out in a flash.

So you don't have to be crossing a raging torrent or mud hole to get bogged, it can happen in the most unlikely places. But we had previously helped 2 stranded motorist with flats and blow-outs plus a huge grader who stopped us because he had lost his way. We had to use our moving map system to get him to his mine site, so I guess we are now about even. 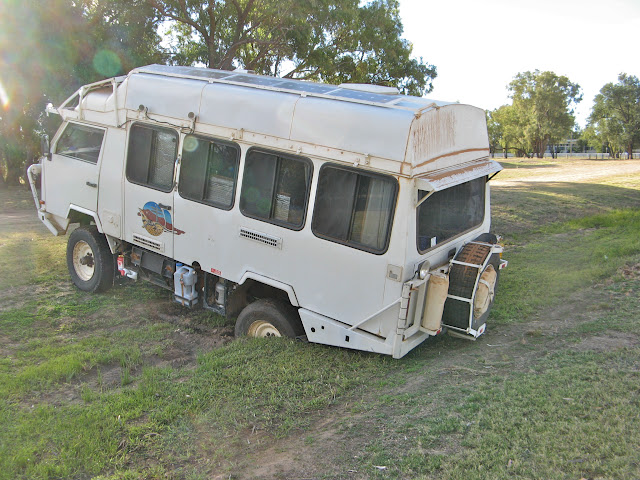 Dandj
Member
Posts: 367
Hal , yes I saw the Cromptons photos, we've been to the same campsite, but not in the Oka fortunately. I did hear that they subsequently banned Oka's and other heavy vehicles from the campground.

Out of interest do you know how they got it out? Forklift? Sky hooks?

Had we not got a tow out of our dilemma, we would have lifted the rear wheels directly using a hub adaptor and high lift jack on a plate and packed the holes with branches, dead cats, Janet's handbag, anything we could find really and just drive out.

Probably would have taken us 4 hours too. We would have left a stick or something to warn others but the caravanners had burnt them all.

OKA4WD.com
Administrator
Posts: 412
From their own page around here:

...we realised that the septic tank lid had completely collapsed leaving the vehicle sitting on the ground with the rear wheel dangling in the septic tank. As there was nowhere to jack the vehicle up, finally found some steel posts to slide under the rear diff so it would not fall in any further. How to get it out? Could break an axle here if I am not careful because the ground had plenty of traction but the right hand rear wheel was actually below ground level, so first gear, low range with diff locks in, softly softly, after it stalled a couple of times, it walked out.
June 21, 2010 at 9:31 PM
David and Janet Ribbans - Oka 148
Oka148 profile here.
Visit our technical and travel blogs: here.