Less More
28 Sep 2018 11:20 #1 by mort
mort created the topic: Portable internet
Hi All,
I came across this while looking for some thing else.
The price and features make it very attractive, I would think better and cheaper than HF radio or sat phone.
Here is the link.
www.rvwifi.com.au/
Martyn

Less More
28 Sep 2018 14:57 #2 by Alister McBride
Alister McBride replied the topic: Portable internet
Wouldn't it be a completely different use to HF or Sat phone? it really only works where your mobile phone works so HF or Sat are still necessary for emergencies in the middle of nowhere i would have thought...? Not a bad gadget though, has some benefits for those who's thumbs have rsi!

mort wrote: Hi All,
I came across this while looking for some thing else.
The price and features make it very attractive, I would think better and cheaper than HF radio or sat phone.
Here is the link.
www.rvwifi.com.au/
Martyn

Mort,
As Alister pointed out that is totally NOT what you want.

What you do want is what they use in the 'communities' which is more like a VSAT dish and modem.
The upwards link is SFA, but the downwards is decent... Not like SBS on demand or netflix, but enough.

I think it is satellite internet...
https://nbn.skymesh.net.au/sky-muster-gen-nbn/?keyword=Satellite%20Internet&gclid=EAIaIQobChMI7vit2rjd3QIVz7rACh3BSgc5EAAYAiAAEgKTOvD_BwEhttps://nbn.skymesh.net.au/sky-muster-gen-nbn/?keyword=Satellite%20Internet&gclid=EAIaIQobChMI7vit2rjd3QIVz7rACh3BSgc5EAAYAiAAEgKTOvD_BwE

Holmz wrote:
Mort,
As Alister pointed out that is totally NOT what you want.

Not necessarily, it all depends on what you're trying to achieve.

As Alistair points out the RV WiFi is a Telstra NextG (3G-850MHz)/4G box, basically a re packaged mobile phone hot spot. They're known as fixed wireless terminals (FWT) and have been around for at least 10 years. I used to install them for Telstra and they're a pretty good product but not an alternative to a Sat Phone or HF radio but they are a very good product delivering mobile comms in the bush.

I've had one of these FWT's in the Oka for several years now.

With an external directional antenna under ideal conditions I've had an effective range of 100 Km using this unit. This particular FWT is a Telstra NextG (3G-850MHz) device that gives a phone/fax and data service with 802.11 Wi Fi, 4 ethernet ports and 2 USB ports for network storage/usb stick or printer. It runs on 10-24 volts and has it's own back up battery.

Whilst it doesn't offer the coverage of satellite it is considerably cheaper and simple to use and as most remote 'communities' have their own Telstra 3G hot spot there is substantial coverage in the outback. With an external dipole whip antenna coverage is very good. eg. I had coverage in the valley at Granny Flat last year.

Another FWT unit I've tried is the Volophone

More bare bones than the Ericcson W25 with phone, data and WiFi it offers text services as well.

An even cheaper and very effective FWT can be 'made' using an obsolete Samsung Galaxy S2 LTE or other old Samsung NextG capable mobile that has an external antenna connection. 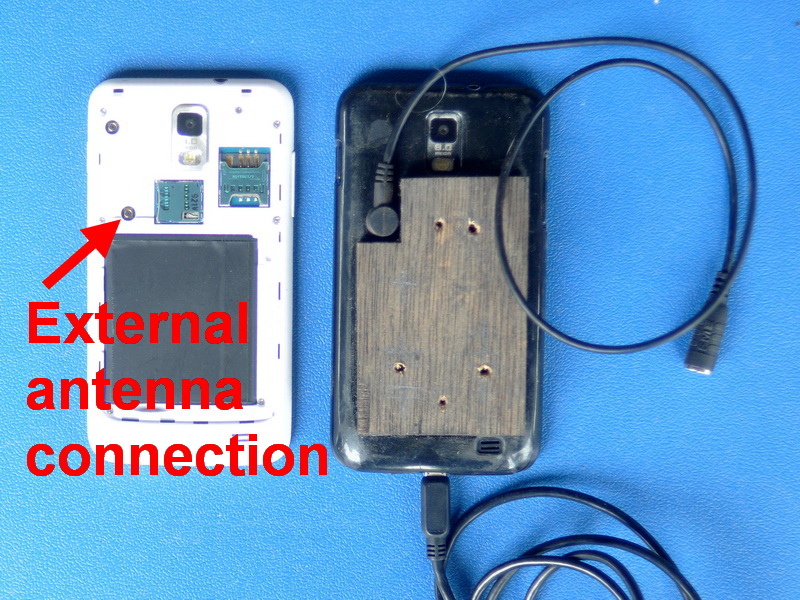 Simply drill a hole through the plastic cover above the external antenna connection and attach an adapter cable (about $25 on ebay), an external mobile phone antenna (around $120-$150), a sim card and connect to a cigarette lighter usb plug and you're good to go

I've mounted the mobile phone in the plastic clip in shell from its carry case and use that to mount the phone. With its 'hot spot' turned on it's now a FWT offering a hands free telephone, text and WiFi.

note. Optus has very little coverage outside the cities and other carrier networks including Telstra re sellers like Boost and Aldi may not work in remote areas. Last time I checked the Aldi T's&C's they specifically stated coverage 'may not be available' in remote areas. 4G coverage is sparse in the outback mostly defaulting to 3G.

So yes these are a very good piece of kit but not a sat phone or HF alternative.

Less More
29 Sep 2018 13:55 - 29 Sep 2018 13:57 #6 by Alister McBride
Alister McBride replied the topic: Portable internet
I just got rid of my Samsung Galaxy S2 4G as it started to have even worse reception than it originally had! (something broke inside i imagine, or Samsung decided it was time i got a new phone...) I've had an antenna plugged into it on and off for a long time and found it pretty crap reception wise, with an RFI CD2195 (6.5 db gain) it was about as good as my partners Iphone, so don't everyone go out and buy an old S2! It was pretty universal though.

I've just got a ZTE Rugged Max 2 which seems to have decent reception and is one of the few mobiles which still has an RF port. Dean, can i plug a directional antenna into it and get the same ability as your unit? It can apparently act as a router...?

Also, i did a bunch of research into phones and frequencies etc when i was looking for a new phone and from memory, think Aldi works on the 3G network so not too bad. I think Telstra just stops them using 4G so they don't compete with the city customers.
Last Edit: 29 Sep 2018 13:57 by Alister McBride.

Less More
29 Sep 2018 15:12 - 29 Sep 2018 15:15 #7 by Dean and Kaye Howells
Dean and Kaye Howells replied the topic: Portable internet
Hi Alister, I've got two Samsung Galaxy S2 LTE's (4G) and both worked fine except that their battery life is a bit poor. They're getting a bit long in the tooth now but are still make a good hot spot when vehicle powered. No reason why you can't just plug your external antenna into your ZTE Tough Max 2 and activate the hot spot when you need it.

The beauty of having a dedicated device is that it's set and forget. I wouldn't get too hung up on 4G though, it's a town thing and basically irrelevant in the scrub anyway. So for regular internet and e mail 3G works fine though a bit slower than at home but works just fine. If you're into streaming video, Netflix etc forget it, you'll need a satellite service to achieve this in the scrub.

Telstra's 3G 850MHz/NextG is the basic phone/data backbone in remote areas anyway so I wouldn't worry about a 3G only service or lack of 4G. When I researched this when Aldi became a Telstra NextG re seller they couldn't guarantee remote access to Telstra's network. I took this to mean that the government subsidised remote community hot spots would remain a Telstra only service.

Why would/should Telstra, now a publicly listed company, cut it's own customer base/profit and wholesale their premium product, 4G, to it's competitors ? I don't reckon the shareholders would be too happy.

We've just returned from this years 'epic' 15,000 Km around Australia jaunt and could have left our Optus mobiles at home for all the good they were. The only two places the Optus phones worked in the scrub (when Telstra didn't) were the privately owned mobile hotspots at Mt Augustus in WA and Curtin Springs in the NT.

Having a FWT permanently connected is pretty convenient and doesn't have to be all that expensive.

Less More
01 Oct 2018 06:06 #8 by Tony Lee
Tony Lee replied the topic: Portable internet
We have one phone with Amaysim - Optus - 20GB per 28 days, and one with Belong - telstra network - 16GB and then throttled. Both can work with tethering so oretty much covers everywhere.
Used to go to the bother of setting up for satellite internet - ANT - but slow, costly and cumbersom if constantly moving. For emergency contact we have a plb, but also a Garmin delorme se tracker whuch is far, far better as it provides twoway sms to any email addtess or mobile phone in the workd plus two way verified SOS service plus tracking and routine messages to friends and family which a plb can't provide.
Tony
Photo Albums - picasaweb.google.com/114611728110254134379
Travels Map - www.spotwalla.com/tripViewer.php?id=5cfc...22ca2d&hoursPast=240
The following user(s) said Thank You: Holmz

Less More
02 Oct 2018 12:32 #9 by mort
mort replied the topic: Portable internet
Portable internet is what I was referring to not phone calls much less emergency calls.
No I dont want internet, emails or every day phone calls by any means and certainly not satelite internet as it is too expensive and I dont want to be carrying around a dish, when I go bush I go to get away from all of those things however I do carry a sat phone just in case.
I was more thinking of the ones who do want to have contact with the outside world and telstra have the biggest coverage but one isnt limited to telstra as any carrier will do, also it may be good when a group go together a prepaid sim can be used and as it has a 40 metre range all can take advantage of it and share the cost.
Its a good product it just needs some creative positive thinking.
Martyn